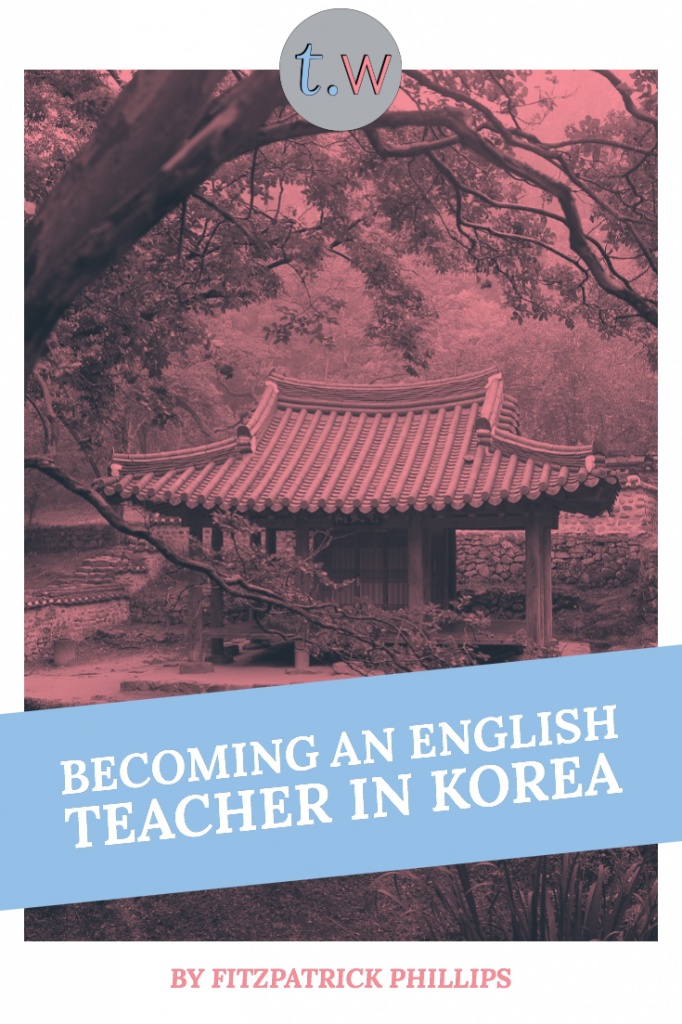 Becoming an English Teacher in Korea

Since I was a young child, I always felt like I did not belong in my environment. I was born and raised in New York City. I definitely have lots of tendencies of a New Yorker, but my heart was always placed someplace else in the world – in Asia.

Primarily, I always had a strong affinity for all things Japanese.

Most kids who discovered the internet back as it was developing ran into things like anime, manga, cosplay and all other things Japanese, but I always wanted something more. I wanted to learn the language. I wanted to live there. Of course, I never thought of living in Japan or Asia and that it would ever be a possibility – only a dream.

Being a huge gamer, especially games of Korean or Japanese Origin, I often found myself stressed that there were, quite literally, hundreds of games that were out of my reach. Either due to them never reaching western shores or due to horrible localization practices; things like horrible translation, low effort voice acting, or rampant censorship – all things that still exist today although not as frequent.

Unfortunately, I had nobody to teach me and had nowhere to start, nor did I have the money to pay for classes. Luckily, with my young and internet-able mind, I was able to run into a textbook series called “Genki” and quickly bought the first volume after teaching myself the Japanese alphabets – Hiragana and Katakana.

Many failures, blood, sweat and literal tears later, I was able to get comfortable with Japanese.

Enough to play those games I’ve always wanted to. Enough to be able to read almost any comic, and import almost any game. It was glorious but at the end of the day, it was simply a hobby – a hobby that only strengthened my love and passion for all things Asian.

I was still in New York.

Where was I ever going to use this in real practice or a professional setting?

By the luck of the gods, I started working for a certain fast-casual dining restaurant called “Shake Shack”. Placed in the city, I constantly ran into Japanese tourists who were always completely blown away by my (low) ability to communicate with them.

How I gained the experience to teach

As Shake Shack grew in size nationally, it also did internationally. I knew there was a certain position called “Cross Trainer” within the company. That position allowed accomplished employees to travel nationally and internationally in order to train new staff and keep quality high and consistent throughout the world, and jokingly always said, “If you guys ever reach Japan, let me know!”.

Little did I know, this would actually happen. I quickly worked my way up the ranks and achieved my goal, and with even more hard work and proving myself, was told that I would be sent to Japan to open the second Japanese Shake Shack. This was literally a dream come true.

Sure I worked really hard, but the management staff and crew that supported me is something that was invaluable to me, and I thank them to this day.

My first trip to Japan

Arriving in Japan, I felt a wave of disbelief. I didn’t think this actually happened. I felt all sorts of emotions, especially nervousness.

Part of the reason I was selected for the team was due to the fact that I knew Japanese. Which is true, but it was far from perfect – far from conversational.

Sure I could read very well, but since I studied on my own, I didn’t have much experience being completely surrounded by Japanese text and sounds at all times.

To make matters worse, the translator that helped the rest of the team didn’t help me because she believed I would be fine on my own.

I was held responsible for training the future of this company with no real way to fully communicate. This was a challenge. I was terrified. I knew how important this was to not only me but the people who believed in me and tried my very best – and succeeded.

The training went very well and my team loved that I was the only one who was able to communicate with them, so I had a much stronger bond with my team than others.

It was an experience I will never forget.

My first trip to South Korea

It only strengthened my will and dream to live in Asia. Not too long after I returned to New York. I was told that my next assignment would be to South Korea. I couldn’t believe this would happen. Not only did I realize my dream of going to Japan but now I was directly going to South Korea. Which was another strong passion of mine.

Although I didn’t know any Korean, I tried to learn as much as I could before my first visit. I learned Hangul in just under an hour – my skills from self-studying Japanese came in handy here.

Arriving in Korea, I was greeted with the same wonderful feeling that I met upon arriving in Japan. I was happy – truly happy. With that experience, I knew that I would love it in Korea just as much, if not more than I did in Japan. When returning to New York, I remembered the horrible pain and sadness I had leaving Korea.

I didn’t want to feel that way again. I wanted to stay in Asia, and thus my journey to do so began.

Over the course of 1 and a half years, I traveled between South Korea and Japan a total of 6 times.

Teaching English as a Second Language

Each time I asked questions and talked to people who could give me information on how to stay in Asia. The one word that I kept hearing constantly was “English Teacher”.

This is something I knew about since a young age but I never thought of myself as a teacher. Then I realized that in many ways, I have been teaching the ways of Shake Shack already. Even Shake Shack’s proper standardized procedures to people in different languages, backgrounds, skill sets and more.

I was teaching – all the time, and I enjoyed it. It brought me joy to do so, and so I became an English teacher who is currently living in South Korea. It’s been over 1 year now and I love it just as much as the first day.

Fitzpatrick’s story is amazing in a sense where his life leads him to his dream job.

Yet it wasn’t like one day he wanted to be a teacher that teaches English in Korea and then the next day it happened. There are requirements and paperwork that needs to be done to be able to teach abroad. Here’s a guide I found by Julio Moreno on what you will need to be able to teach in Korea.

Becoming an English teacher in Korea is possible. Traveling the world is possible and Fitz’s story proves it possible. For more stories like this one check out these other articles below:

Trying my best to learn every day, progress every day, and try something different every day.