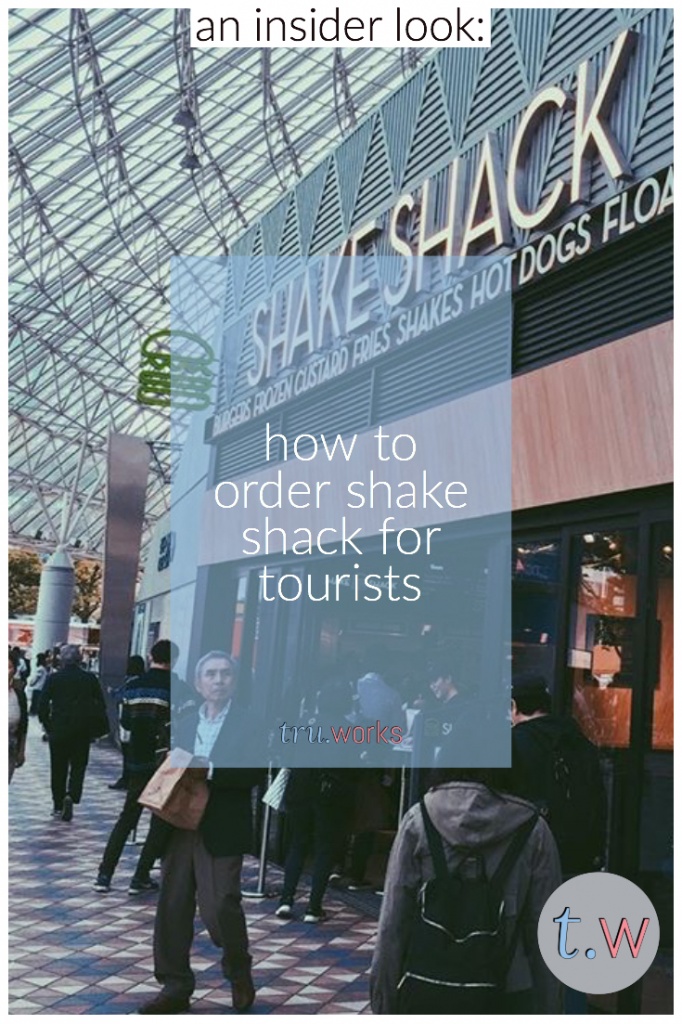 How to Order Shake Shack From an Insider

As a Shake Shack insider, I know how to order Shake Shack. The menu, the kitchen, and the logistics of this complex yet simple burger chain are all familiar territory to me. Visitors from around the world visit Shake Shack.

As an insider, I’ve realized that there are a few things that are unfamiliar or a bit confusing to the average guest and I want to be the connect the dot for those who want confidence in ordering at Shake Shack restaurants.

I’ve found that there are 8 things that can be refined at Shake Shack which means I’ll be giving tips about the order process, waiting, and receiving your long-awaited meal.

Here are 8 tips to ordering and enjoying Shake Shack more than you ever thought you could!

How to order at Shake Shack

One, Alright, at this point of Shake Shack’s timeline there are over 100 restaurants open around the world and yes that means some things may vary from restaurant to restaurant but for the most part much of what Shake Shack does is the same throughout the chain and that includes ordering burgers.

I’ve found that many guests should be aware that at Shake Shack we have signature 5 to 6 signature burgers. That includes the classic Shackburger, Smoke Shack, Shroom Burger, Shack Stack, and Chick ‘n’ Shack. Each burger (excluding the Chick’n’ Shack) comes with cheese. I know what you’re thinking, why not call it a Shack Cheese Burger then?

Honestly, I don’t know this is just what it is. Even the Shroom Burger (Which is a vegetarian option, hence no meat included) is called a burger which has muenster cheese fried within its portabella mushrooms. Remember, whenever you order any of these classic burgers, they all include cheese, no matter what (You can take away the cheese but then it becomes a custom burger).

One last thing, if you take anything away from any of these classic choices the sandwich ends up not being that option. For example, Shake Shack gets many guests who order a Shackburger with no cheese. In actuality, that’s a hamburger with Shack Sauce, lettuce, and tomato. In the Shake Shack world, it’s not a Shackburger it’s a custom hamburger instead.

You can change up the classic burger

Two, So many guests prefer to custom make their burgers and that’s alright with Shake Shack. Shake Shack just wants to please its guests. With that being said, you can make your burger however you’d like as long as we have what you want in our kitchen.

One tip is that ordering a burger outside of the classic options means you’re actually ordering a plain burger without cheese, a hamburger. If you’d like a cheeseburger, you must state cheeseburger or else it’ll be assumed you want a burger no cheese. Remember, to make it easier for the cashiers to understand your burger preference you must let them know if it’s a cheeseburger or hamburger.

Another thing to remember is that if you order just a cheeseburger or hamburger that that is all you’re ordering. Those options come plain automatically and they won’t add any toppings unless stated. That means that if you want a burger with everything on it (lettuce, tomato, onion, and pickle) you must say it.

Some cashiers will double check with you to verify if you truly want a plain hamburger or plain cheeseburger but if you receive your burger plain and want vegetables added later, they’re required to give you your vegetables on the side for you to put in yourself because your burger has left the kitchen.

Every burger also has the option two be doubled, tripled, and even quadrupled. Don’t forget to state how many patties you’de like on your burgers. If not stated, cashiers assume you’d like only one single quarter pounder patty on your burger.

The Shroom Burger is a vegetarian (not vegan) option that includes a buttered Martin’s potato bread bun, Shack Sauce, lettuce and tomato, and the Shroom “patty” which consists of two portabella mushrooms fried together with muenster cheese in between each mushroom. This burger is very hot because it is fried and is delicious.

The last “burger ” to discuss is the Chick’n’Shack which honestly is very simple to understand. The confusion many guests have with this sandwich is if it’s gluten-free. Or if it can be ordered grilled instead of being fried and the answer is sadly no to both questions.

Four, Now that we have squared away the confusion of Shake Shack’s beloved sandwiches, we now must come to Shake Shack’s drinks which include shakes, fountain soda, lemonade, iced tea, beer, and water. The biggest confusion Shake Shack guests may have with their drink and even custard options are the sizing of every cold option they have. Let’s start with the shakes.

Shake Shack is known for their shakes

At Shake Shack, they’re known for their shakes. I mean, their name is Shake Shack. The shakes come in only one size in various flavors. Their shake flavors are pretty common compared to other restaurants but there is the mysterious black & white shake that not many understand what they may be. The black & white shake is a vanilla shake that is mixed with chocolate fudge sauce. It’s so yummy and sweet, but it is not a cookies & cream shake which usually only rolls out in the summertime. (Update: This will be a permanent shake!)

Another thing Shake Shack does with its shakes is they have a shake flavor of the month. On the menu wall, Shake Shacks list what special shake they’re making for the month. Some popular options include red velvet, mint chocolate chip, and even matcha flavors that can be spun into a shake. This changes every month which gives regular Shake Shack guests the ability to “shake” things up every once in a while.

As for fountain sodas, iced tea, root beer, lemonade, and beer, Shake Shack has a small and large option. There is no medium drink option!

Let’s not forget Shake Shack has beer and wine options

Six, The concretes must be explained further. Concretes are what McDonalds’ calls McFlurry’s and what Dairy Queen calls their Blizzards. That’s the only way I can describe them. They consist of custard that is spun with or without mix-ins that you can eat with a spoon out of the cup. Each Shake Shack restaurant has its own signature concretes. This is so important because Shake Shack gets many guests who’d like a concrete that they’ve had at another location but not each Shake Shack can make that concrete because sometimes they don’t have the mix-ins for that concrete available.

How waiting and seating work at Shake Shack

Seven, we’ve gone through almost all menu options. It’s time to complete your order and wait for your meal. You already let your cashier know that you’d take your food to stay or to go. That cashier should have given you a buzzer. Your buzzer has a number that correlates with your order in case they call out your name and someone else has the same name as you.

I’ve noticed that some Shake Shacks have a different thing going on where your buzzer vibrates and your food may not be at the counter yet. This doesn’t mean that you should fret, your food is coming. It’s getting its final touches before it gets handed to you. I suggest letting the person at the counter get organized and manage to hand out the orders themselves so that they don’t feel rushed and accidentally hand you the wrong food. Accidents can happen!

To stay at Shake Shack or to go?

Whether you decide to stay or to go that’s up to you. Personally, I’d take a bag to go and if you find a seat after you get your food you can sit. If you decide to stay you can wait next to someone who’s finishing up and as they get up you may ask to take their seat if the restaurant is packed.

Remember, your buzzer will notify you when your food is ready. You may end up waiting longer than the estimated wait time given to you. I suggest heading to the counter and inquiring about your meal.

As for wait times, every Shake Shack has a wait time. The goal is a 5 to 7 minute wait time but it can get so busy that the wait time can reach 10 to 12 minutes. Complications happen in restaurant kitchens. The kitchen issues resolve themselves in no time.

I’m totally fine with the wait time going up if my food comes out perfectly. That’s what Shake Shack does. Shake Shack would rather give you a perfect burger than a burger that is not perfect!

What to order at Shake Shack

Eight, Not only do you need to know how to order Shake Shack. But What do you order at Shake Shack?

Shake Shack is a place where people around the world come to enjoy a classic American lunch. It’s a restaurant that is successful and cherished by New Yorkers and other people around the world. There are small things that Shake Shack does that many may not know of. Such as they offer water for free to any guests in their lobbies. Shake Shack is a generous restaurant where they don’t even charge for LTOP. What is LTOP? LTOP is a short acronym for lettuce, tomato, onion, and pickle. They also don’t charge for soda water and to use their wifi.

I believe you now know how to order Shake Shack

I hope these 8 very long tips help you order Shake Shack better. With these tips, I hope that visitors from around the world may not feel overwhelmed by the order process. Or the lines and the many menu options Shake Shack has to offer.

Please sit down, relax, and enjoy your meal at Shake Shack wherever you find one. Whether you’re in Tokyo or New York City these tips should help you. There you have it. You officially know how to order Shake Shack.

UPDATE (March 30, 2018): We do deliver through the Postmates app now. We are opening in Hong Kong and throughout China!

Check out what I did in Hong Kong and other adventures below: