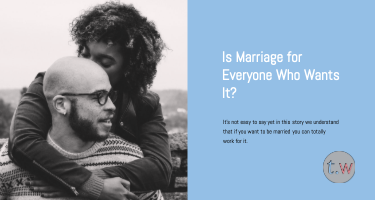 Is Marriage for Everyone Who Wants It?

Some of us don’t know if marriage is a comittment we can make yet. Yet others of us know that it is something that we want. But just because you want to be married does it mean that you’re ready to get married? Is marriage for everyone who wants it?

My husband, Drew, and I met when I was sixteen years old. He was actually a friend of my brothers first. Thankfully, I was blessed with a pretty cool brother, and instead of saying “stay away from my sister!”, he told Drew to go for it.

We really had nothing in common from the start. I was this small town girl who played sports and wore sweatpants and a ponytail most days. Drew, on the other hand, grew up 20 minutes away in the “ghetto” of a larger city and wore skinny jeans while playing the guitar everywhere he went. To be honest, it’s really by the sweet grace of God that we fell in love.

Fast forward two years later, I being a senior in high school, not knowing what would lie ahead for me. Drew was going through a period of depression, working a job he HATED and not seeing any light in sight. Maybe it was the emotions of graduating and leaving everything I had known for the past 18 years behind, but I just couldn’t handle trying to cheer him up, too.

A marriage after God

So, we broke up. While I left to (attempt) to go to college in another state, Drew stayed behind and, with God’s help, put his pieces back together. While I studied at this bible college, God also molded me into this new person, one who finally felt like she could conquer anything. But something was still missing.

God’s timing is everything, I wholeheartedly believe that. Because it just so happened that when I came back home to go to a wedding, Drew was also in that wedding. After six months apart, and finding ourselves and who we were in Christ, God happily brought us back together. We danced, I cried. I attempted to go back to college, only to move back home less than 2 months later. In just 3 months, Drew proposed to me on a Sunday in front of our church, friends, and family. Not even 7 months later we were married in that exact same spot. Looking back now, I really can’t believe that all happened in a year. People probably thought that we were crazy for getting married at 19 and 21, but we were finally back together in a good spot, and we knew we wanted to spend the rest of our lives with each other, so why wait?

Marriage is not what everyone thinks it is

We just celebrated our 3 year anniversary, and with all of the ups came a lot of downs, but I still wouldn’t change a thing. I’m not going to lie to you and say it’s been a walk in the park. As of right now, we’re both just working day to day jobs just to get by. But we’re also both following our dreams of becoming a pastor and a blogger/stay at home mom/coffee shop owner/helping kids in need advocate.

Also, as I said before, Drew and I are still polar opposite. It takes a lot of compromises to do things together. I drag him out to go on walks with me and our son, even if it means him “dying” halfway through. He drags me to midnight Spider-Man movies when my bedtime is 10:00 (I mainly just go for the popcorn.)

When one of us is feeling down, the other is there to pick them back up. When I’m getting worried about finances and our future, Drew brings me some candy and lets me take an hour shower. Days when Drew comes home from a rough day at work, I let him take a nap or go hang out with his friends. We’re choosing to love each other and meet one another’s needs, daily.

Marriage is a daily choice

You see, marriage is a choice. You choose to spend the rest of your life with that person. When Drew and I made our vows, it wasn’t “I do… until I get bored.” or “I do… until I get tired of fighting.” No, it was “I do… for life.” I choose you for life. The love is always there. The same love from when you first met and had those stupid butterflies. You just have to fight for it sometimes, actually most times.

You have to choose to find that love that you had for them and show it. In your actions. In your words and in your heart.

I do believe that marriage is for everyone, you just have to choose it.

More from Jordan Dolan at her What Mama J Has to Say Blog.

Thank you for going on this journey with me and listening to my voice. My goal is to spread grace, joy, and love by using my heart and witty writing (and maybe some ranting) to inspire you all to follow whatever dreams you’ve been dreaming of. You can find my personal blog at www.mamaj.blog and follow me on Twitter @jorddawg to keep up with me.