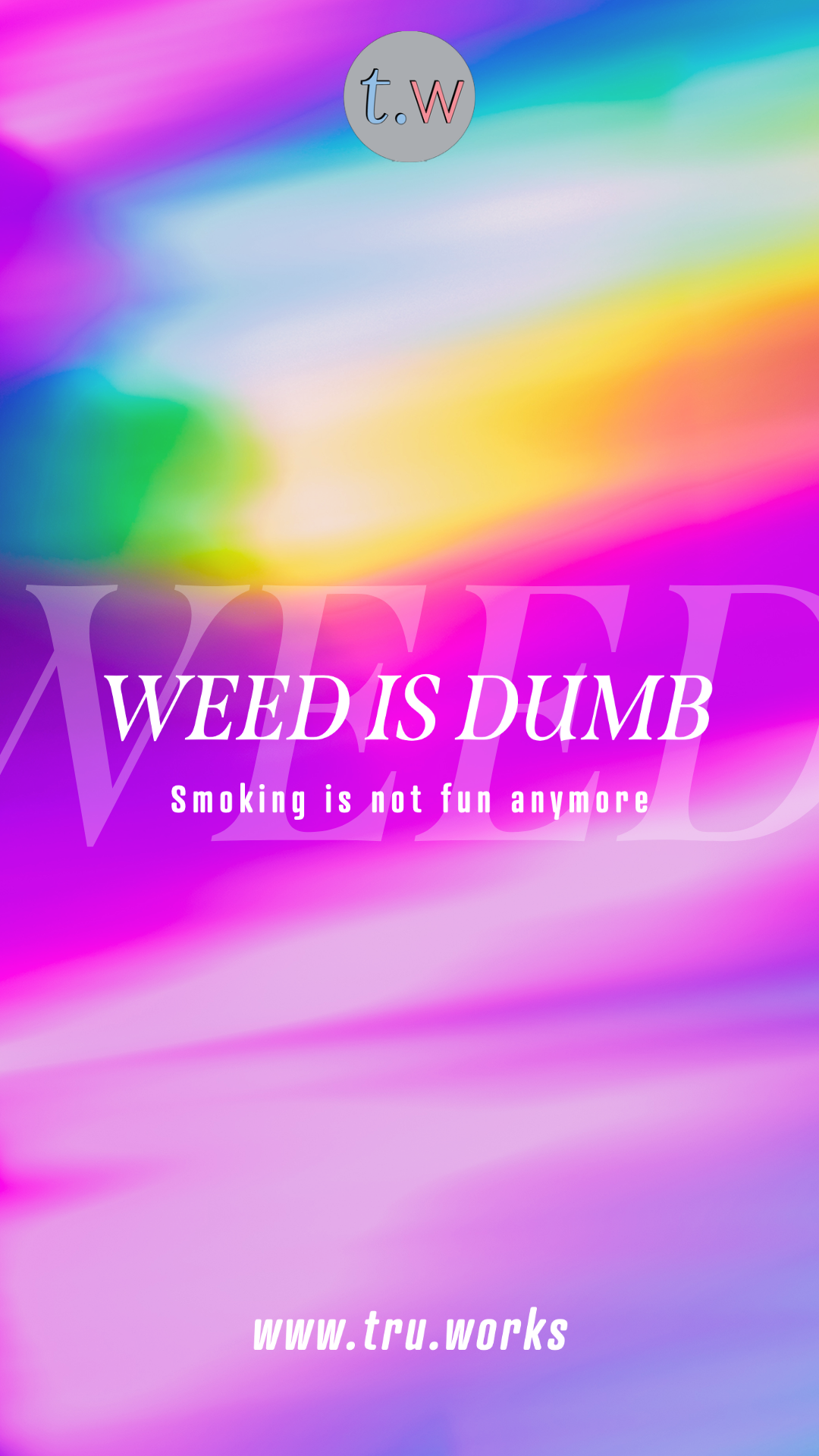 Marijuana is Dumb (My Weed Journey)

Smoking weed was a norm in my social circles from when I can remember. Through high school and most of my twenties, I truly avoided smoking because I truly believed marijuana was dumb. To me, it was dumb to smoke and anyone who did smoke was dumb. To clarify, I viewed smoking marijuana as a waste of someone’s time. I always wondered why people would like to waste their time away and sit on the couch to fatten up on some munchies. I couldn’t understand it. But, I gave marijuana a chance. Even though I strongly believed what I believed at 28 I decided to try it. After a year I still believe marijuana is dumb.

Now, there are multiple reasons people decide to smoke weed. My reason was to simply see what all the hype was about and also because I didn’t want to die not trying it. For the first few months or so I truly enjoyed smoking weed recreationally. It wasn’t something I did daily. Although I’ll be honest there were times I smoked possibly 3 days in a row.

I never developed the daily habit of smoking marijuana. The daily use I’ve seen others do was a way of like to them but I knew I never wanted to develop a habit where I needed to smoke to function. What I enjoyed the most about smoking was how all of my anxiety would disappear for a few hours and I felt truly relaxed for the first time in days or weeks.

As time passed and smoking on the weekends became normal to me I felt like a happier person. I realized that I had daily anxiety. There’s the anxiety you get when you’re about to perform or when you[‘re going to try something new but I have anxiety where it’s so normal that I thought this was my true personality. I’d wake up anxious about the day and if I could perform. Every day to me was a performance. To be smart, to be healthy, to be a hard worker. When deep down I Don’t want to be any of those things. I don’t want to participate in what society does.

I learned that I don’t enjoy working, I don’t enjoy thinking but just doing. Calculating, and forced labor and office politics were things I can do and could do well when I tried but were all a performance. Smoking helped me truly accept that I hated working, I hated trying to be whatever I was trying to be which was a smart, and hard-working woman. Back then I thought that was a breakthrough. It led me to think about changing my career and trying different things to see what was it that I truly wanted to do.

Marijuana led me to get out of control

As time passed and smoking weed became a background thing I did yet something I did look forward to at the end of my week, I suddenly felt like ‘regular life’ was impossible to try to participate in. I went to work later, I left work earlier. I was home less often, but I was more artistic. My thoughts were never present. I found myself living in the past or the future. I would space out while people spoke to me thinking, “Wow, I really have to listen to this person”.

I’d constantly think of surviving off the grid and how I’d find a way to live a life truly alone. No social media, no friends and family, and absolutely no work. I didn’t want to think about the government or the stock market anymore, Not only that anything that happened to me physically would begin freaking me out.

The anxiety I had was actually boosted while I was smoking weed. I believe this was the case for me because of how big of a difference I felt living life high and living life sober. My sober life was dreadful and I couldn’t bear to deal with it anymore. A second more would have meant I was living a life I Didn’t want to live. But a year ago I was more than proud of what I accomplished and enjoyed the office politics and labor I was doing.

When I smoke I know I’m in an altered state that I could never achieve naturally. I would naturally never achieve pure bliss. Not without some sort of help. My anxiety would never let me feel peace. Every day I’d survive. While I don’t live in hunger and in poverty, I am in a place where I don’t know where I’m going and what I’m doing and the only thing I do that makes my life worth any value to me is working on Tru.Works, and my art.

I was right in my opinion that marijuana is dumb. What I mean by that is that I still believe it’s a waste of my time. Whenever I Did smoke it wasn’t that I smoked until I couldn’t move but time would pass by and I did nothing. All I did was escape reality for a few hours. To me, that bothered me because I had so much I wanted to and to do that I wouldn’t simply just do it.

To conclude, marijuana is dumb to me because it has to be

For some, marijuana probably helps them in different ways. I respect that. To me, I have to tell myself that marijuana is dumb to not want it. It was fun while it lasted but I’m now on a journey to truly just be myself and to face reality as my true self.

I don’t want to be high anymore. I don’t want to be tipsy from alcoho0l ever again. These are things I have to stay away from and smoking marijuana led me to make that decision. I probably won’t be off of either of those things completely but I know that I won’t want to make either alcohol or weed part of my daily life. I’m pretty happy about that.

So, through my smoking weed experience I learned that:

For more stories like this one please check out:

Why Popping pills was Life-Changing

How to Express Your Male Depression in Words